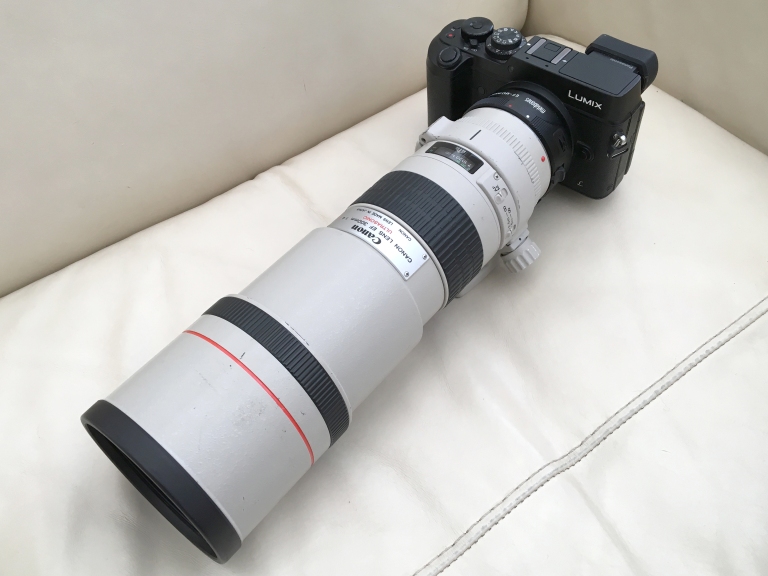 I bought a Metabones Smart Adapter (T) for my GX8 a while back to see how my Canon lenses might work. I had used a Nikon version before, but that wasn’t a smart version so I had only manual focus with the Nikon lenses. I hadn’t really had much time to use or test the Canon adapter up until now so thought that I would try a 300mm and see how it worked.

I photographed some birds in my garden and below is a shot of a blackbird. I found focussing to be very quick – pretty much as I would expect on a Canon body. I used the single point focus on the GX8 as to me  that always seems more accurate.

The shot below was handheld – with one hand resting on a support for balance. So the camera was moving around a bit. Shutter speed 1/640 and F5. Considering birds move about very quickly the AF kept up with the bird really well. There were a few out of focus shots but that was more down to me. Also on this camera the lens is equivalent to a 600mm. The bird was about 5 metres away, so very shallow depth of field.

This is from about the first couple of dozen shots ever shot with the lens/adapter combination so I’m still getting used to it. But from the first few images with this lens I would have no problem using it with the GX8. I get a 600mm equivalent without the weight and cost! I like using the GX8 when I’m just out and about shooting stock images as it’s  preferable to carrying the extra weight of Canon bodies. A GX8, couple of M4/3 lenses and perhaps a Canon 300mm makes a pretty lightweight kit which will cover almost anything.

Processed from RAW in Capture One Pro 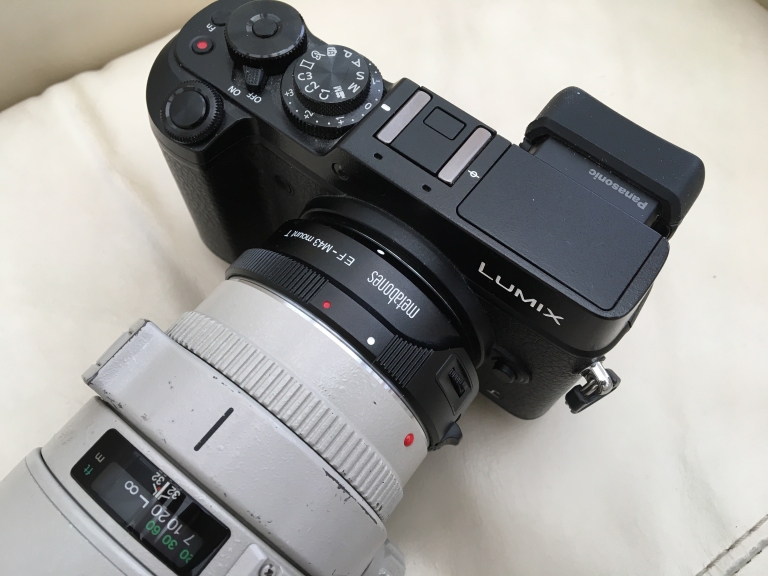 Recently I was asked to make a time-lapse video during the creation of Susan Stockwell’s art installation at Hall Place, Bexley.

The installation – Trade Winds – would be made from thousands of coins on which would ‘float’ small ships made with paper money from around the world. I was aware that the installation could take up most of the floor space in the room which was about 8 x 10 metres so the first thing to sort out was where to put the camera. A tripod wasn’t an option as the chances of it being moved by accident were high but luckily there was a small lighting rail on the ceiling which I could use to hang a lightweight camera. I mounted the GX8 with a small clamp – backed up with Gaffa tape and a safety chain just in case the clamp and tape didn’t hold.

I used a 7.5mm Samyang Lens to cover the whole floor with the intention of cropping into the frame for the best coverage of Susan’s work.

The camera has a very good built-in intervalometer which is very easy to set up to shoot a series of images. I shot RAW still frames and didn’t use the in camera conversion to movie (quite frankly the conversion in camera is not very good). I processed the RAW frames in Capture One so I could output as jpegs which were then imported into Premiere Pro. I could then crop the full frame images as necessary to the 16:9 format.

It all worked pretty well and was used as both a standalone time-lapse and also as part of a longer video about the installation.

The only real issue I had was with the battery life which lasted  about 180 minutes, maybe a little more. Shooting about 3 frames a minute gave me around 600 frames or so depending on which battery was used. The installation progressed over 5 days so I would be away for much of the time, going in when I could to change batteries.  Sometimes the battery died before I could get in to replace it so there are a couple of points where the time-lapse moves on slightly quicker than it should but overall I think it works.

Susan Stockwell’s work can be seen on Su’s website.