So there you are halfway through a job and you think to yourself, hmm battery is low – think I’ll change it. Shut down camera – take off battery and put on fresh battery – simple.

Except when you power up the camera you get a BIG message saying card not readable and images may not play as expected – recover card? Or something like that. I was slightly freaked out at the time so can’t remember the exact phrase – but it’s one you never want to see on your screen halfway through a job.

This was me yesterday. I was shooting a small conference event. First mistake was I didn’t check camera well enough beforehand and I still had it set on relay record. That was because the last job I had it set that way to reduce the amount of cards I needed to use. I only realised this about 20 minutes into the day and thought – ‘it’ll be OK’. I very rarely only shoot on one card as I always like to be backing up while I’m shooting.

The morning went well – got the most important speaker covered. Speaker change-over came and there was a slight delay in getting the new speaker up and running (usual laptop issue!). Hey, change batteries I thought! That’s when it happened.

Luckily I had a Canon 5D3 with me and quickly set it on a tripod and got back to the Sony.

Now the only issue I have with the Sony is that I don’t particularly like the menu system. I much prefer the menu on my old Canon XF100.

So I got this message and thought OK I’ll recover the card. But in my haste I didn’t read the menu correctly.  I could blame Sony’s menu but I won’t as I know it was because this was the first time it had happened to me and I was unsure of what I was doing. I got a blinking card icon and thought – OK its doing something and waited – meanwhile the speaker was up and running!!

After a few minutes I realised something was wrong and went through the process again. This time I did it correctly and got a message saying something like “recovering card estimated time 1 min 43 secs”. Card came back! Clicked on thumbnail button and there were my shots from earlier, whoopee!

So I took out that card, kept it safe and put a new card in. Rolling again!

The new card switchover wasn’t quite as simple as that. It was the ‘A’ slot that had the problem and when I put a new card in the same slot I got a card unreadable message. When I tried to format the card I had another ‘cannot format’  kind of message. So I switched to the ‘B’ slot which worked and I continued the job using just one card in that slot.

This morning I decided to find out why the new card wouldn’t format. I looked through the menus and came to ‘Repair Image DB File’. That’s worth a try I thought. It worked – very easy – very quick.

So if this ever happens to you it can actually be sorted quite quickly. Probably in less than 4 minutes.

1/ Recover the card when prompted by the menu system – it will only take a couple of minutes ( if you read the instructions correctly – unlike me!)

2/ Take out the recovered card and put a NEW card in the problem slot (mainly to make sure you save what you have recovered on the previous card) – go to the menu. Go to the bottom section ‘OTHERS’ and then select ‘REPAIR IMAGE DB FILE’

This will both recover your images (Step 1) and make both card slots useable (Step 2).

This of course is not definitive and maybe I was lucky to get my footage back so the advice comes with no guarantee. However that is the way it worked for me. 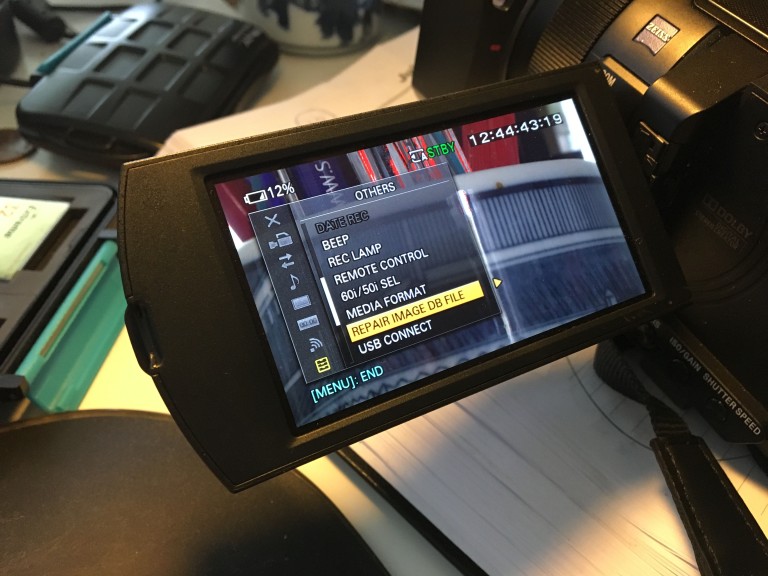